Here’s a thoughtful review and mini retrospective by a fan/blogger/music enthusiast.   This one means a lot on a few levels, but mostly because I know where he’s coming from…  That is, I know what it means to be a fan of an album and how heavy that relationship with a piece of music can be.  Thanks, Greg.  And good work.

me and anders parker go way back, or at least it seems. im not talking about me and anders, personally, but me and his music. like most of my most beloved purchases, i happened up varnaline’s sweet life purely by accident aka i was buzzed, walked into quaker goes deaf and blindly bought it. i was a regular, they new my tastes, and recommended it. went home that night, put it on the hi-fi and after the opener “gulf of mexico” new i had to put the whole thing on repeat. call it a gut feeling, but i probably listened to it 6/7 times that night. i had just started dating my then girlfriend/now wife, and when she came home at midnight, she joined me in the listening party, the beer flowed, the music grew more and more personal. it truly was one of those musical moments when you connect with something, and know it will always stay with you. over the next 1.5 years, that was our record, listening to it constantly. fast forward to august 26, 2000, we danced to the last track on the record “sweet life” at our wedding. fast forward 2 days after said wedding, and we brought our little boombox to the beach of gulf shores, alabama, and played “gulf of mexico” as we laid on the beach as the water rolled over us. it was magical…

in 2001, he/varnaline released songs in a northern key which if legend holds true, he locked himself in a cabin somewhere near the catskills and recorded mostly all of it by his lonesome. granted, i may be off on some of this, as there are other players on the record, but me thinks most of was recorded all by his lonesome. one thing that makes it ultra magical, is that one of the best producers on the planet, john agnello, produced/mixed/engineered this record. as i type this, my wife is sitting on the back porch, drawing and listening to songs in a northern key. the day my son mac was born, we did two things: 1. tossed around naming him anders and 2. played “still dream” in our delivery room. once we got a good look at him, he just looked like more a “mac” than an “anders.”

anders parker writes songs that stick to the bone, to the soul, to whatever you hold dear. i am merely scraping the surface of his work by talking about those two varnaline records – there are two varnaline ep’s too, if memory serves me correctly. i dont do research, i just write in a furry. much like hansel, i celebrate his entire catalogue with the passion of

he’s got a new one out entitled there’s a blue bird in my heart, and straight off the bat, like sweet life, i knew this one was something really fucking special. about 1.30 minutes into the opener “the road” is when i knew it, felt it. “well we all walk the fire and we stood in the rain but the sun will shine brighter when weve weathered everything… youre changing, and im changing too, youre changing and im changing just like you….” this sounds like my life the past few years, for better or worse, but mostly better. everything about there’s a blue bird in my heart is like taking a trip through memory lane. its not some fake nostalgia for something that was never really there, but for some reason romanticize as if it actually meant something. it brings up true feelings, real life memories, the good, the bad, the fucking ugly, and the beautiful. this may not make much sense, like most everything, i say, but if i were you, i would listen to sweet life and then there’s a blue bird on my shoulder and maybe it will? there’s a blue bird in my heart will no doubt be in my top 5 records of the year… there really is no reason it shouldnt be in yours too.

From the AllMusic review: “It’s likely that Parker will always have to scurry down musical rabbit holes, and travel sonic and textural backroads, but as evidenced by There’s a Bluebird in My Heart, he always seems to return to where his highly individual songwriting and playing take center stage. Lucky for us.”

One has to give Anders Parker credit for sticking to his guns. Since leaving Space Needle to create Varnaline in the mid-’90s, he’s stubbornly mined a vein that melds his considerable abilities as a songwriter and guitar player with a restless ear; he’s always loved experimentation and exploration, attempting to articulate all of the music he fancies. For four years he engaged in widely varying projects with mixed outcomes, including his 2010 ambient guitar album, Cross Latitudes; New Multitudes, his 2012 collaboration with Jay Farrar, Jim James, and Will Johnson, putting their collective spin on unseen Woody Guthrie lyrics; and 2013’s Wild Chorus, a pop duo album with Kendall Meade. With There’s a Blue Bird in My Heart, Parker circles to embrace his electric guitar and crafty songwriting again with excellent results. The electric piano and guitar hook on opener “The Road” have a soulful pop hook at their center, but they give way and open wide, evolving from dreamy neo-pysch country to sprawling, moody guitar rock that recalls his love for Neil Young’s “Cortez the Killer.” “Animals” is chunky, spare, stomping, blues-tinged rock, equal parts Parker, Young, and the White Stripes. “Silver Yonder” is a tender, ethereal acoustic song with a ukulele and a Wurlitzer in the foreground, highlighting his stark vocal, echoed by a small chorus on the refrain. “Feel It” could be from a latter Varnaline record; its alt country vibe articulated by ringing acoustic and electric guitars, a warm drum kit, plodding bass, and Parker’s singing voice, sounding sweeter yet more disciplined than ever. There isn’t anything here that prepares one for the multi-faceted, simultaneously dreamy and crunchy prog-psych attack that is “Jackbooted Thugs (Have All the Best Drugs).” Here, melodic verses interchange with knotty guitar and drum sections, Wurlitzer echoes, echo effects, layered vocal harmonies, and squalling six-string solos that carry it through eight minutes of rock & roll glory. It’s likely that Parker will always have to scurry down musical rabbit holes, and travel sonic and textural backroads, but as evidenced by There’s a Bluebird in My Heart, he always seems to return to where his highly individual songwriting and playing take center stage. Lucky for us.


You can read the review here.

Looking back over the breadth of Anders Parker’s two-decade career, there is little he has yet to accomplish or prove. The stylistic range encompassed by his Varnaline work alone is evidence of Parker’s determination to explore, illuminate, absorb and transcend every musical influence he’s experienced, from alt-country and raw folk to pastoral Americana and baroque art rock. And Parker’s catalog under his own name has been equally diverse, be it the transitional familiarity of 2004’s Tell It To The Dust or the ambient instrumental guitar wash of 2010’s Cross Latitudes. Throw in his recent pairing with Mascott/Sparklehorse multi-instrumentalist and longtime cohort Kendall Meade, and you’ve got an impressive and intimidating curriculum vitae.

Parker’s latest contribution is a welcome return to his Varnaline/early-solo sound, perhaps in reaction to his recent experimental streak. Opener “The Road” is a visceral eight-minute core sample of Parker’s most closely held inspirations, starting in a soulful pop vein and careening to a blistering Crazy Horse conclusion, while “Animals” cross-pollinates Parker’s Youngian love of twang bar blues with a stomp-and-holler ethic that could be mistaken for Jack White. Parker is equally comfortable with the kind of quiet intensity that can be as unnerving as it is soothing (“Unspoken,” “Don’t Let The Darkness In”), then counterpoints it with the epic and nearly prog-paced roar of the exquisitely titled “Jackbooted Thugs (Have All The Best Drugs).” After several years of wandering in the sonic wilderness, Parker has returned to his roots with a velvet-fisted vengeance.

You can read the review here.

Blurt Magazine gave the new album 4 out of 5 star review.

Not to be a dick about it, but thank the gods Anders Parker has rediscovered his electric guitar. His years in Varnaline and his first couple of solo records spoiled us – the marriage of singer/songwriter craft and loud rock was too perfect. The shift (descent?) into softer, more sedate sounds starting with his 2006 self-titled record seemed to enervate his songwriting as much as his studio performances. But there were signs of dissatisfaction on the overtly poppy Wild Chorus, the record he shared with his old pal Kendall Meade as Anders & Kendall, and that restlessness has apparently sent him back to his amplifiers for There’s a Bluebird in My Heart.

The blues-rocking “Animal,” grunged-out yet elegiac “Jackbooted Thugs” and bracingly rocking “The Road” soar to the skies or dig into the dirt in a way Parker hasn’t attempted in a good long while. This isn’t to say there aren’t quieter songs here. But folk rockers like the appropriately widescreen “Epic Life,” the gorgeous “Unspoken” and the exceptionally melodic “Don’t Let the Darkness In” sit in context, rather than dominating, and come off as that much more inviting and beautiful as a result.

If you’d given up on Parker after a few too many sedate navelgazers, perk your ears up once again:  There’s a Bluebird in My Heart is the sound of a great artist coming back home.


You can read the review here. 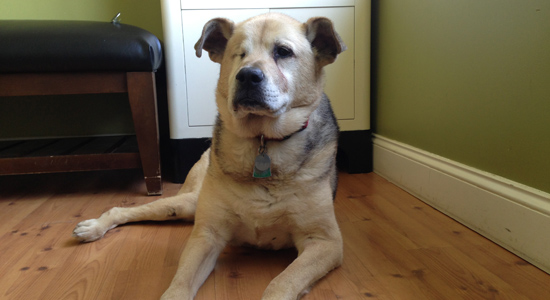 Anders was was the guest editor at Magnet Magazine. He wrote about a whole slew of things. Wanna know what his favorite hammer is? Need a no-fail roast chicken recipe? Interested in his defense of Paul McCartney and Wings? You can find all that and much more here.