This month marks the 20 year anniversary of the release of my first album, Man of Sin.

In the mid 90s I was in Portland, OR, working at McMenamins Mission Theater as a projectionist, bartender and grill jockey. I had made a number of recordings in “real” studios, but was never happy with any of the results — too little time, too little control, too “nice” sounding, too much money. By that time I had discovered Guided By Voices, Sebadoh, and other so called “lo-fi” bands. Elliot Smith was in PDX and his first solo record came out around that time, too. I wasn’t really interested in lo-fi for its own sake, but the idea of making my own record without time constraints on the cheap was surely appealing (workers controlling the means of production!)

In the winter and spring of 1994 I had a small one bedroom apartment at a building on the corner of 19th and Irving in NW Portland (The Worthington!) that looked out towards downtown Portland. The comforting smell of the Henry Weinhard brewery wafted through the neighborhood on many days. Across the breezeway there was an attractive young woman who often sat in the window at her typewriter, shades open wide, naked as a jaybird, pecking away at the keys. Inspiring, to say the least.

I set up my little recording rig (4-track, yo!) in the living room and set to work recording songs. I played all of the instruments myself, except for a couple of cool bass lines that my friend Bob MacKay performed. I don’t remember much about the actual recordings. There was no auto tune or punching in or multiple takes. Things happened pretty fast. If I needed more than 4 tracks I would bounce down a sub-mix and then continue overdubbing (hey, The Beatles did it!) I played the drums right there in the apartment. I never got any complaints. 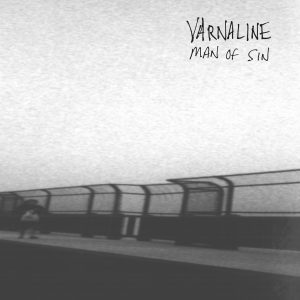 Later in 1994 I made my way down to LA and met John Cole who was working at Bug Music. He listened to a cassette (!) of Man of Sin that day and offered to sign me to an administration deal for my publishing. He started sending the album around to various labels.

At the same time my friend Jud Ehrbar was in Rhode Island making recordings with his friend Jeff Gatland. Jud and I would send cassettes back and forth to each other with our latest songs. By 1995 Jud and Jeff had signed to Zero Hour records as Space Needle and released Voyager. I spoke to a lot of different people at labels big and small and decided to go with ZH.

Man of Sin was released on February 20, 1996. I listened to the record last night (on vinyl!). I hadn’t listened to it in years. I don’t have a favorite record — all of my records have been pretty different on many levels — but Man of Sin is definitely a sentimental fave. It’s the one that got things rolling for me and the reason that I met a lot of good people over the years, many of whom I still work with and love.

Thanks for all the emails, texts, calls, and dms.

Waiting out #Ida in Florida thinking about Lee Scr

The man, the myth, the legend. RIP, Charlie Watts.

Thanks to @americanahighways for the kind words an

Bandcamp Friday Alert :: Hey friends, if you are c

First single, Wolves, from new album is out today.

Here’s a question: what is an album of recent v

Lake Pontchartrain from the north shore.